3 reasons why you should bring your kids to work

Seven years ago when we first refurbished SYMBIO’s premises in Holešovice me and Robert (fellow cofounder) designed an office for ourselves behind a glass partition, however it wasn’t long until we felt separated from the rest of the company as the partition had turned into an impenetrable barrier between two worlds, us and them. After a few months we had to leave what had become known as the “fish tank”, and move right back among the rest of SYMBIO.

Initially we had ideas for making a kindergarten, a resting room or a game room, but before we knew it the “fish tank” was temporarily taken over by accounts desperate for some space. As we grew and leased another floor our kids + meeting-room was realised together with architects and as SYMBIO’s twenty-seventh child is on its way, there won’t be no shortage of occupants of the play-room for a couple of years at least.

Some workplaces in Czech actually have a “no family” policy while others have something like a family-day once a year, giving kids or other relatives a chance to see where their family member work and what they do. We decided however to have SYMBIO open for family members and kids, and by doing so, hopefully help in three ways:

Firstly we want children to be able to see and experience where their parents go every morning, what they do, how it looks and maybe meet parents colleagues. My dad was a bus mechanic all his life and although I only visited his workshop a few times, I knew what his work involved as I saw buses around me every day. With a white-collar job however, it’s not that simple to explain and therefore helps when kids can spend a part of their day at their parents’ workplace.

Secondly we want parents to spend more time with their kids. According to a survey of at-risk children in the Czech Republic (performed in 2008 by the Sirius foundation) approximately 40 % of Czech parents only spend as little as 45 minutes a day with their children. I can’t imagine being with my three children so little, and that’s why I want everyone at SYMBIO to be able to spend more time with kids at the office. Furthermore, most mothers (that we know at least) welcomes a break from taking care of the children from time to time. It’s obviously tiring to sit around the sandpit discussing nappies with other mothers every day, and many would love to work for a few hours a week. At SYMBIO we make sure mothers (and any child) can have fun in the play-room while the mother relaxes by working (relax by work – sounds weird, right? : ) It seems to work like that for most though). 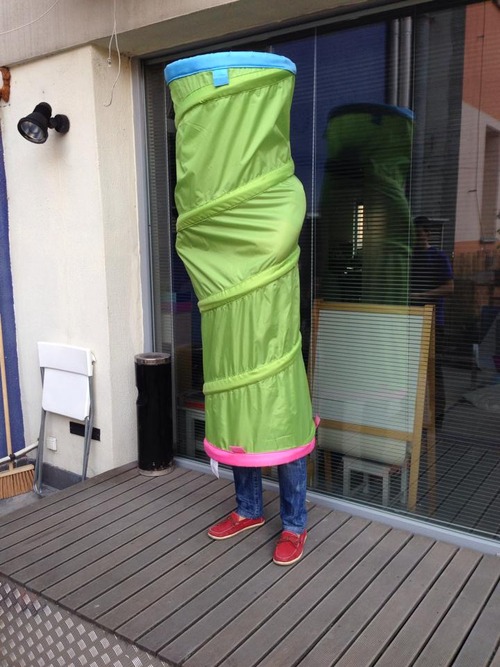 Thirdly, as children give us an enormous amount of energy and inspiration I’d also like for them to be part of SYMBIO’s creative process, to inspire us through their imagination and straightforwardness. During every brainstorming we try to liberate our minds, unblock our grown up inhibitions and move away from stereotypes and having kids around certainly helps with this, and if they aren’t around it doesn’t hurt to lie down on the Tatami mats in the kids-room to get the ideas flowing.

Unfortunately these days family and work life are both competing for time and attention and while giving to one, we many times sacrifice the other. As we only live once and strive to be happy in the long run, I’m convinced that any competitiveness and compromise has to be replaced by synergy and that’s why I dearly hope our play-room turns out to be another step toward more happy coworkers and families.

We are what we read

We love to play, and our clients thank us for it